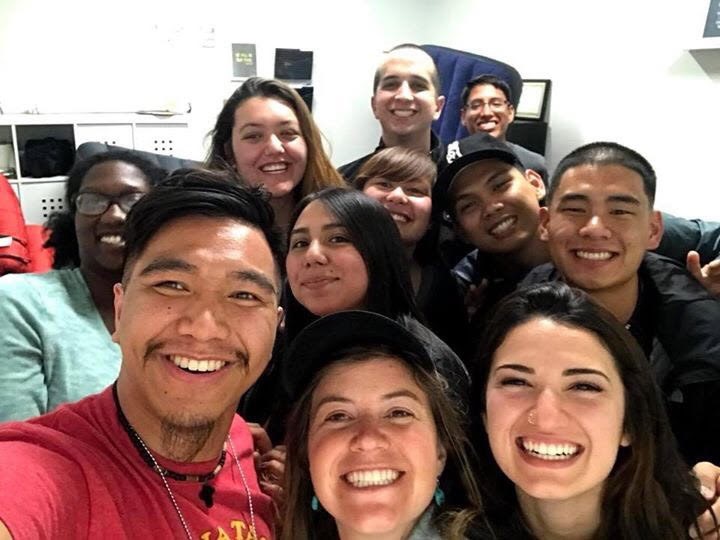 “He yelled, “HEY! You’re just a privileged *bleep*. “If your God is a God of love, WHY DID HE LET ME GET PUNCHED IN THE FACE WHILE I WAS SLEEPING, ROBBED OF ALL MY STUFF, AND LEFT ON THE STREETS TO DIE? If you claim to be love, why won’t you let me into your house, let me wash my hands in your sink, let me break bread with you?”

“All I could to was apologize and continue walking.”

Max Discar from our SDSU chapter went on a Chi Alpha mission trip to the Tenderloin District, the part of San Francisco with the highest crime rates and largest homeless population. AGO Ministries helped fund his mission trip. In this post we’ll be sharing some of his experiences!

“I met veterans who were forgotten, old grandmas and grandpas who laid in bed all day; our visit could very well have been the only interaction they’ve gotten all week!

“The greatest problem these residents faced wasn’t a lack of food or even housing—it was neglect.

“We prayed for a lady with a rare heart condition (she had a dog named “come here”, it was funny), prayed for Nana, an old grandma who was worried about her kids, a military veteran who was injured in Vietnam, and so much more.

“I have learned never to have an agenda when sharing the heart of the Father. Instead, we need to create relationships and as a byproduct of our friendship, God will open up the conversation to His truths.

“We’re not salesmen. We carry the heart of the Father. 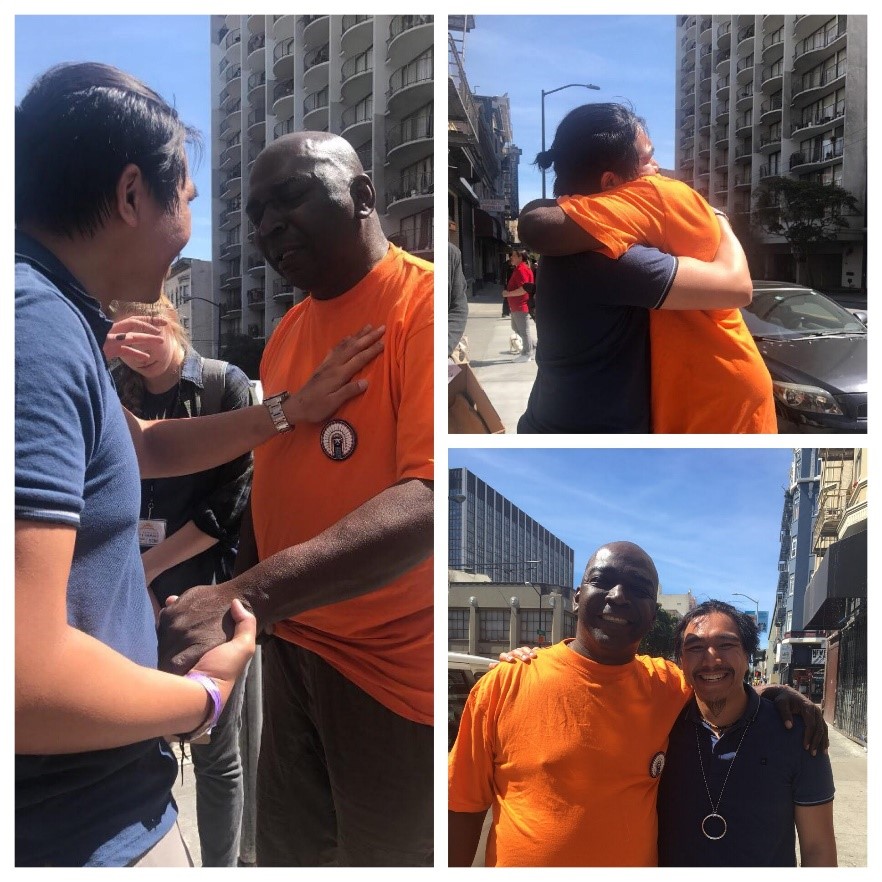 “He approached our group and asked simply: “P-pray”. Digging for answers, our leader found out that he just had a stroke within the past hour.

“I said, “God sees you. He’s proud of you. He’s saying right now Well Done, My Good And Faithful Servant”, he was moved to tears.

“After, filled with joy, he exclaimed: ‘God sees us. He wants to minister to us and THROUGH us!'”

“I can picture Karen’s torment, her hysteria, her madness. She threw herself on the trashcans in front of us, dry vomiting. One of our leaders stepped in and asked, “are you okay?”

“Is there anything we can do to h—”

“YOU CAN’T HELP ME! NO ONE CAN HELP ME! I’M ENDING IT ALL TODAY!

THIS IS THE LAST DAY I’M GOING TO LIVE ON THIS EARTH!”

Max records how he stepped forward:

“KAREN! YOU CAN’T STOP ME! 8 People this year have already killed themselves in that building, no one would care if there’s one more!”

“Relax. Tell me what’s wrong. I want to listen.”

“I proceeded to listen for about 7-8 minutes. I interrupted.

“I knelt on both my knees and looked directly in her eyes:

“Listen. I believe you. But more than that, the Father in Heaven sees you. You are not invisible. He sees your pain, He sees your struggles, and He wants you to trust in Him right now.”

“There was silence, so I continued: “Karen, God has not given you a spirit of fear, but a spirit of love, of power, and of a sound mind. I’m going to pray for you right now, is that okay?”

“When we prayed for her, a certain peace overwhelmed her and she collapsed into my arms, and I declared the Father’s heart over her.

“We prayed for emotional healing, we cast out demons and declared Jesus’ life over her, and for physical healing. At the end of this short interaction, she said “for the first time, I feel God’s love.”

“I respond, “Karen, don’t commit suicide. You are too valuable for you to take your life”. With tears, she cries out “I won’t. I can’t. I have too many people relying on me. You’re right. Thank you.” She walked back into her building, completely different and at peace.” 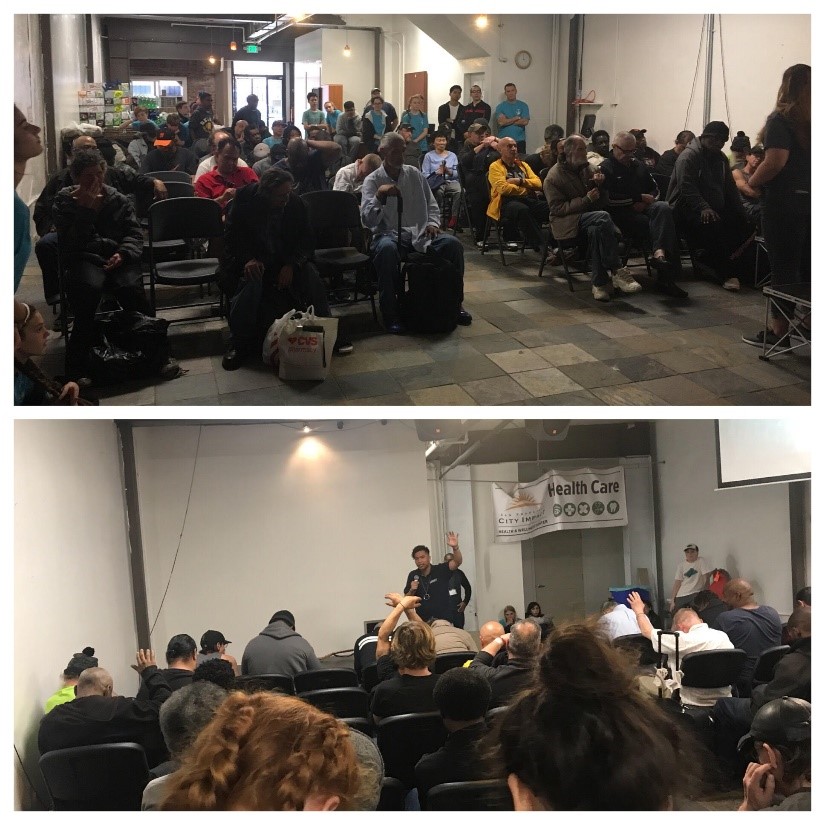 Max tells how City Impact let him lead worship and preach at one of their events:

“I talked about the meaning of Easter. My passion for God giving us a new life and hope carried through the entire sermon. At the end of it all, I felt led to do a mini alter-call.

In prayer, while all heads were down, 9-10 people raised their hands to accept Jesus Christ as their Lord and Savior for the first time in their life. Glory be to God.”

“In the crowd, there was a man named Paul. He was confined to a wheelchair. The Holy Spirit stirred up in me, and I began to migrate towards him during worship. Paul had feeling in his legs already, but he had bad knees and a misaligned spine so he could not stand. We prayed.

“We declared the “dunamis” power of God over him! “Father right now we command healing and restoration over this man! Pain, leave right now in Jesus’ name! Knees, I command you to be loosened in Jesus’ name!”

“Paul responded and said, “I feel something! I don’t think there’s any pain!”

“Susan and I rejoiced together and asked this question in boldness:

“Paul, can you stand? We’re going to help you stand.” He paused for a moment and said, “Sure. I believe God just healed me!”

“Then he stood. Without help. Moved around. Praise God!

We proceeded to declare healing for Paul’s spine, and he turned in ways that he said he could not turn before!

“Jesus heals. He really does do miracles today, right now.”

“The thing that shocked me most was a man we met who was clearly demonically oppressed, fully loaded with anxieties, depression, and paranoia.

“After listening to his story for a good 15 minutes, we attempted to pray for him. As we reached out he yelled, “GET AWAY FROM ME, YOU’RE GONNA KILL ME!” and he immediately left his stuff and ran away.

“We waited by his stuff until he came around, and again, we told him we were gonna pray for him. Lashing back, he reached into his back pocket (as if reaching for a knife or a gun).

“We’re going to pray from right here okay?” We declared in freedom both in the spirit and in the physical, and after the prayer, there was no tangible difference. We returned to our home in silence.

“The craziest part is that this man, Josh, he was a pastor’s kid.

“It felt like any one of us could turn out like Josh, if we continued to make the wrong decisions. This encounter really gave me an idea of who these homeless were: real people.”